History Of the Temple

Karkala Sri Venkatramana temple is an ancient temple belonging to Gowda Saraswat Brahmin (GSB) community and it is also the main attraction of Karkala. The devotees from all corners visit the temple and obtain the grace of the Lord Sri Venkatramana. 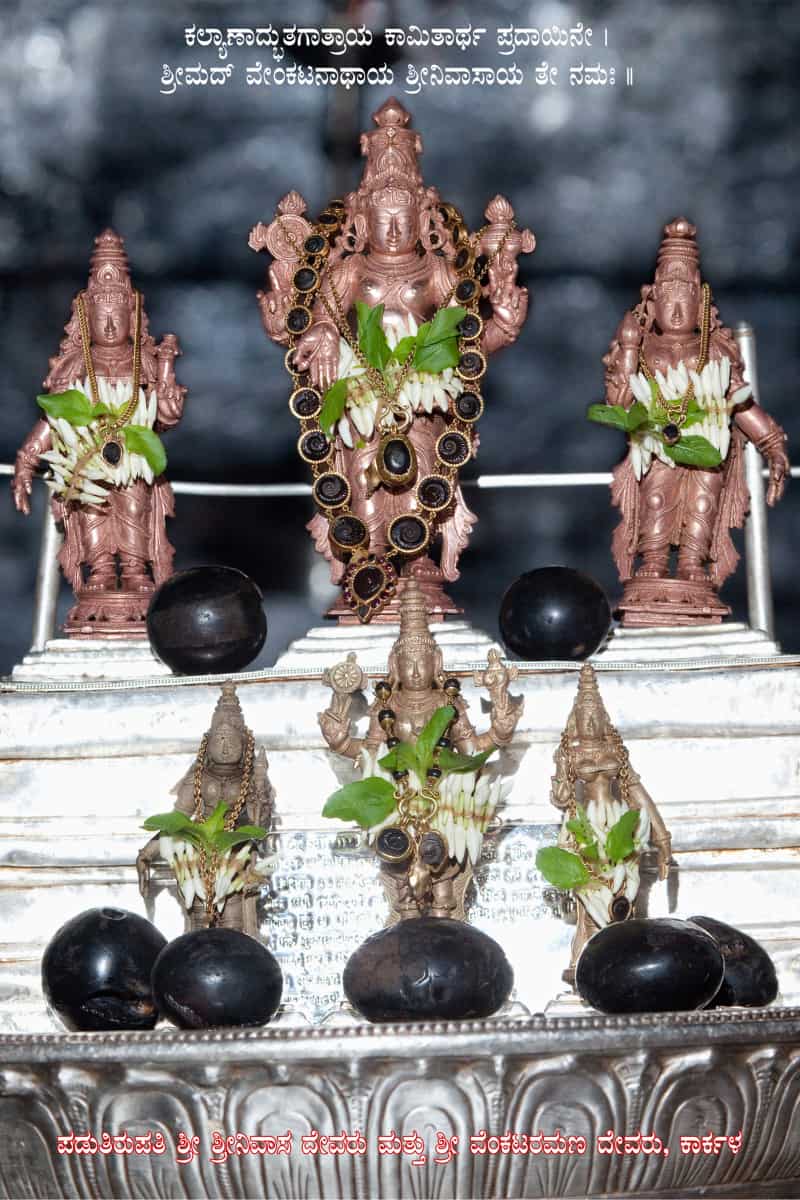 Lord Sri Srinivasa is worshiped as the main and the presiding deity (pattada devaru) of the temple and is popularly known as ‘Chappara Srinivasa’.The daily deity (uthsava murthy) Lord Sri Venkatramana is also known as ‘Bhakta Vatsala’ who fulfills our wishes,answers any prayers made with devotion, instances of miracles in answer by the Lord here are cited by many. Legend has it that the idol of Lord Sri Venkatramana was brought to Karkala by Soma Sharma who is a ‘Vasista Gothreeya’ Gauda Saraswath Brahmin while migrating from Goa along with him.‘Sohire Prabhu’ family provided him the accomodation.

In those days there were no Vaishnava temples near Karkala and the only Vaishnava temple near by Goa was ‘Tirupati Sri Venkateshwara Temple’. So Prabhu and Sharma family thought of building a temple. People over here motivated them and supported them.They built a temple and installed the idol of Lord Sri Venkataramana and started worshipping him in the year 1450 A.D. Eventhough the exact year of installation is not known, as per the records the reinstallation ceromony was performed in the year 1537A.D.

Story goes that when a group of dacoits had attacked the temple during 1500 A.D, the priests of the temple had tried to prevent the main idol of the Lord and certain other valuable belongings of the temple from being taken away or destroyed by the invaders, by casting them away into a well near Mulki.

After the situation cooled down, the priests got back all the valuable belongings which they had cast away into the well, except for the main idol of the Lord. One day person from Mulki found the main idol in the well. By knowing this ,the people of karkala rushed to mulki to get back the idol.By the time they reached mulki,the people over there had installed it in ‘Shree Veera Vittala Temple’. From this incident,the people of Karkala assumed that the Lord wanted to grace the land of Mulki by his presence there. They found themselves in a dilemma as to what had to be done. They found it hard to believe that the Lord wanted to preside over Mulki, instead of Karkala. As if a solution to their dilemma,Lord appeared in the dreams of the people of Karkala and asked them to hand over his idol in Mulki to the people of Mulki. The Lord told his devotees that in the days that would come by, a hermit (sanyasi who used to collect Kanika from the devotees to be taken to Tirupati) would come to Karkala and give them another idol of the Lord in which he would have enshrined himself. As per the predictions,a few days later a hermit from Tirupati,who was an ardent devotee of Lord Venkatramana came to Karkala and handed over an idol of the Lord to the people. That idol was installed in the temple. The hermit laid down a condition that the idol would be taken every year to Tirupati along with the Kanika received and the hermit settled down in Karkala itself.

The Kanika received in the name of the Lord of Tirupati is offered religiously to Tirupati Temple,periodically in a pilgrimage called “Rama Dandu”. So far five such Yatras in the History of the Temple, the latest being in 1970, have taken place. Once a year in a grand and ceremonious procession Lord Shri Srinivasa is taken out in Golden Mandapa and Lord Shri Venkatramana in the Golden palanquins for Vanabhojana which literally means an outing to the forest in a magnificent Hagalu Utsav,to the eastern part of Karkala. Since Tirupati is in the east,Lord Srinivasa is supposed to have been taken to Tirupati. Incidentally,this is the only day in a year when the Lord Srinivasa is taken out of the temple. Thus the word given to the hemit is symbolically kept up year after year. The presiding deity over here Lord Srinivasa is called the Lord of Tirupati by the devotees, as the daily poojas here are almost like the ones offered at Tirupati. Therefore Karkala is also known as “Padu Tirupati” (Western Tirupati). The gold, silver & wooden “Vahanas” and also the other paraphernalia of the temple,speak volumes about the glory and the greatness of this temple.