The cow has always been conferred due respect, the origin of which can be traced back to the Vedic period and Rigveda refers to cow as ‘Aghnya’, the one which must never be killed. Historically, our social customs and practices laid great emphasis on protection, preservation and augmentation of the cow and its progeny. Cow is the mascot of India’s rural agrarian economy and Indian society has always respected the cow as ‘gou-mata’ as it is often considered a second mother.

Cows were first domesticated more than 8000 years ago. Since then they have played a central role in agro based communities, by serving the humans in numerous ways; meeting their need for nutrition in the form of milk and dairy products, helping in cultivation as agricultural labour, Gaumuthra has medicinal value, providing fuel in the form of cow dung etc. Their importance in human life is accentuated by the fact that apart from Hinduism, Jainism, Buddhism, cow was also considered sacred in Zoroastrianism and the ancient civilizations of Egypt, china , Greece and Rome.

In the above backdrop, a few enthusiastic and socially sensitized youngsters of Karkala town with keen concern about animal welfare in general and the care for cows in particular, decided to start a Goshala. They approached the Honourable Trustees of Sri Venkatramana Temple for support and guidance in the year 2006, and also sought a piece of land for housing the Goshala. In January 2007 an association was formed entitled Sri Venkatramana Goseva Samithi. Thus a humble cow shed with 600 sq.ft area was started in 10 cents of land near Sri Venkatramana Temple, Karkala . This Goshala was inaugurated during April 2007 in the benign hands of His Holiness Srimad Sudhindra Thirtha Swamiji with 5 cows and was named Sri Venkatramana Goshala, Karkala .

Inspired by the noble cause and impressed by the keen initiative, financial assistance started flowing in and the number of cows increased to 16 within two years. At this stage it was decided to have a bigger and self – sufficient Goshala and once again the trustees of Sri Venkatramana Temple were approached. The Board of Trustees magnanimously provided 5 acres land on the outskirts of Karkala Municipal Corporation limits on long term lease basis. 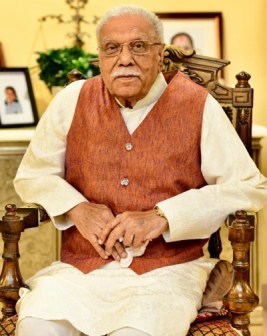 The organisation was converted into a registered body – a Public Charitable Trust, as defined in the Income Tax Act 1961 and “Sri Venkatramana Goshala Trust®, Karkala”, formally came into being on 10th October 2011.

At this stage, Sri Lalchand Gajria, a Bahrain based entrepreneur extended financial support to the tune of Rs .75 lakh under the aegis of Gajria Foundation, a Charitable society established by him.

In the light of the aforesaid, foundation stone for the new Goshala premises was laid on 27th October 2011 and, within a record time of 5 months, the new Goshala shed measuring 7000 sq. ft., along with one building was completed and inaugurated on 8th April 2012. The building measuring 3500 sq.ft. accommodates the residence of the Manager and a store room on the ground floor and, the staff quarters on the first floor. Later two more storage space measuring 1850 sq.ft and 912 sq.ft. were put up for storing of grass. Two grass cutting machines were install here. 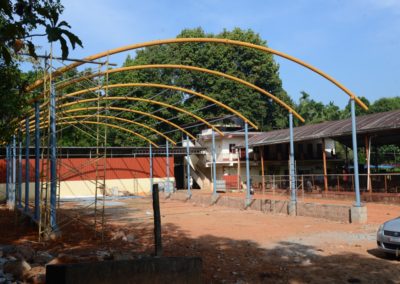 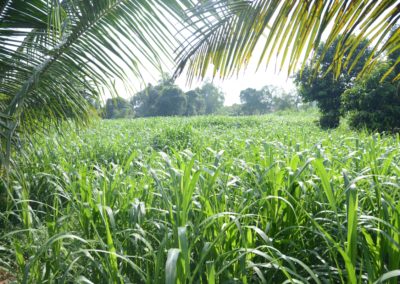 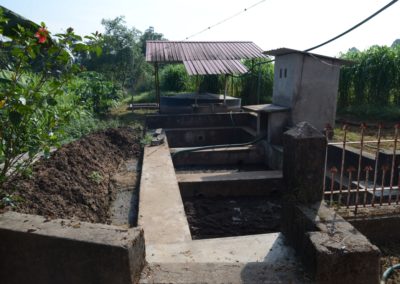 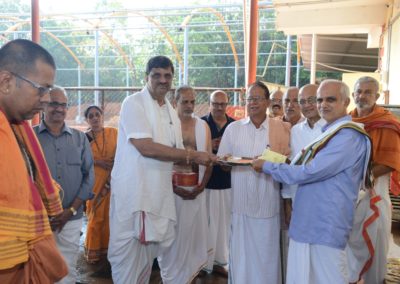 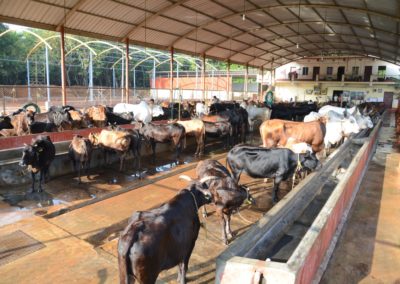 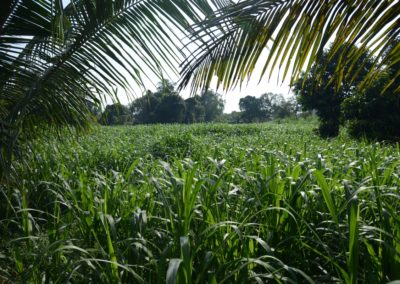 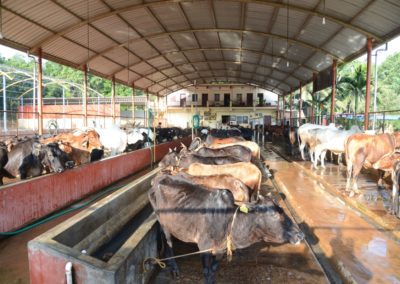 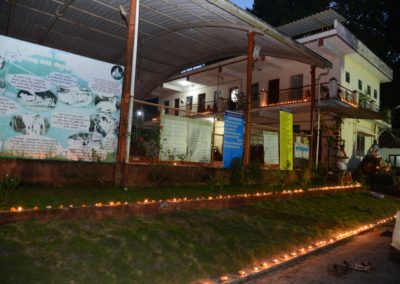 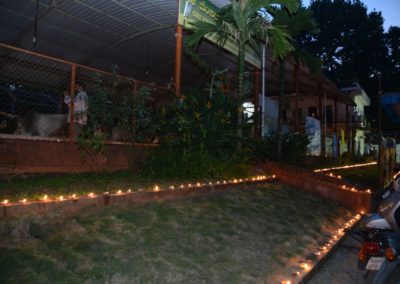 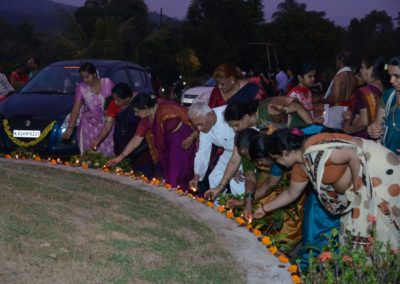 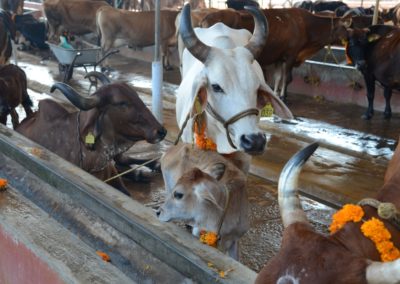 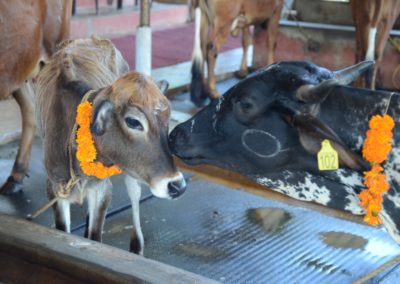 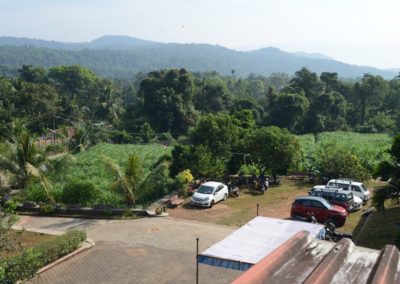 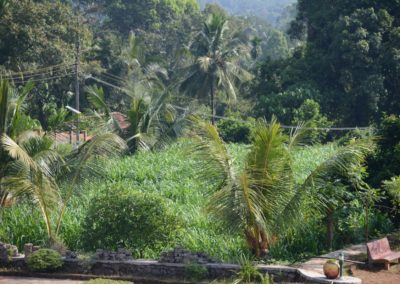 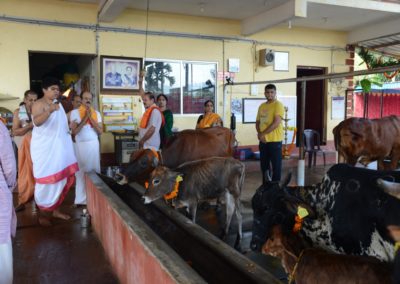 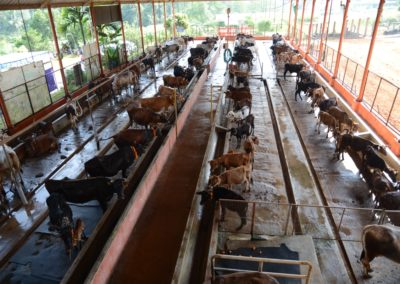 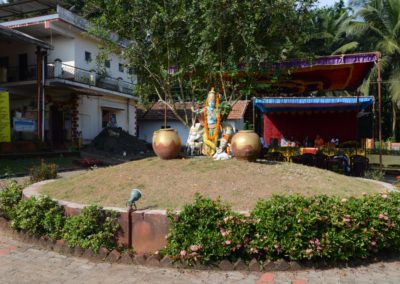 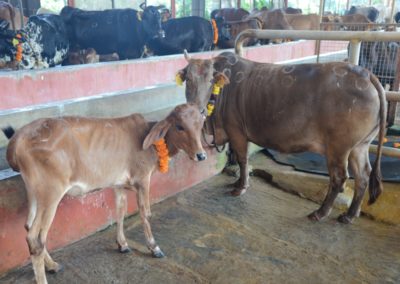 Most of the cows in Goshala are unproductive / rescued / malnourished / abandoned and they need special care and feed.

Accordingly, the cows are fed a balanced diet thrice a day. They are given adequate quantity of wholesome cattle feed for their nutritional needs. Dry Jowar grass known as Sorghum in English is fed to growing or lactating cows, followed by fresh green grass twice a day.

Currently 2 acres of land of Goshala is utilized exclusively for growing green fodder to meet their nutritional requirements. To increase the per acre production, Perennial fodder crops like Hy. Napier (BNH-10) is taken up. It is proposed to increase this area are by 2 more acres to cater to the need of animals particularly in summer.

Cows need continuous unrestricted access to clean water and the same is supplied from one open well and two bore wells. Well water is used for bathing of cows twice a day and cleaning of cow shed thrice a day.
Another 12000 lts. of recycled water is available from Nitte Gajria Gajria Hospital, located next to the Goshala. This is used through for sprinklers for growing green grass.

For keeping in good health, cows should not be tied down continuously. They need be allowed to spend 3 to 4 hours a day outdoors with the best possible access to natural vegetation. To facilitate the above, the process of developing a small area for grazing is in progress.

Gaumutra from cows is used for therapeutic purposes in traditional Indian medicine, Ayurveda and also for purification as per the Vaastu Shastra.  This is produced in Goshala and is sold in the local market at a reasonable price.

Cow dung, the manure is used as a rich fertilizer, an efficient fuel and biogas producer, a useful building material, an insect repellent, and a disinfectant.

The smoke from burning dry cow dung has been observed to repel insects, including mosquitoes, leading to the use of cow dung as a pesticide. In villages, cow dung is applied to walls and floors as a disinfectant as well as an insulator. Both cow dung and dry cow dung cakes are produced and sold in the local market.

Small beginning has been made towards green initiative by installing a gobar gas plant and the energy is being used for cooking food for staff. A few solar power street lights are also installed.

It is proposed go green completely in near future by installing solar energy system for the remaining power requirements.

is celebrated, a day after the Diwali in the month of Kartik, also known as Bali Pratipada, which is one of the auspicious festivals of the Hindus. Krishna was also named “Gopal” because of his service to the cows.  In the 11th (11.11.43) Canto of Srimad Bhagavatam, Krishna told his beloved cousin Uddhava that he can be worshiped by offering cow grass and other suitable grains. Worshiping cow is equal to worshiping Krishna. Gopuja is being celebrated every year with great enthusiasm and people attend in large numbers.